In exercise of the powers conferred by sub-sections (1) and (3) of section 3 of  the Telangana Urban Areas (Development) Act, 1975 the Government have appointed Sri Marri Yadava Reddy, as Chairman of the Kakatiya Urban Development Authority until further orders vide G.O.Ms.No.250 M.A. & UD (M2 ) Department dt.10-10-2016 with the following members. 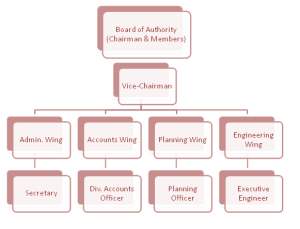 The object of the authority is to promote and secure orderly development of all or any of the areas comprised in the development area concerned according to Plan and for that purpose, the Authority shall have the powers to acquire, by way of purchase or otherwise, hold, manage, plan, develop and mortgage or otherwise dispose of land and other property, to carry out by or on its behalf building, engineering, mining and other operations, to execute works in connection with Housing Schemes particularly for Weaker Section, formation of bye-pass roads, new roads, widening of roads as proposed in the Master Plan, Junction Improvements, Sites and Services Programme, Disposal of sewage and control of pollution, other services and amenities and to do anything necessary or expedient for the  purposes incidental thereof.
As laid down in the Telangana Urban Areas (Development) Act, 1975 the main functions of the authority are:

area according to Master Plan and Zonal Development Plans.

works such as roads,  buildings,  and  other schemes  within  the  development
area so as to provide infrastructure facilities to the areas that are available with
KUDA and also by   co-ordination and regulating the activities of various
agencies of   the State and Central Government  and  other   Local Authorities.

JURISDICTION:-
The jurisdiction of the authority which is called the development area comprises Warangal Corporation limits and 181 villages.  The jurisdiction of Kakatiya Urban Development Authority has an area of 1805.00 Sq. Kms and has a population of 13.00 lakhs as per 2011 Census.

The Planning Wing of the Authority attends to the works of preparation of layouts, development approvals, R.D. Plans and Junction Improvement Plan, Zonal Plans for the development of the area, Master Plan variation maps etc., The Planning Officer is the head of the wing of Planning Wing under control of Vice-Chairman.

Engineering Wing shall carry-out developmental works such as roads, buildings, Water supply, Sewerage and other schemes in the lay-outs promoted by the authority and also take up developmental works.  The avenue plantation, development of parks and maintenance of the Nurseries is also present under control of the Executive Engineer.  Horticulture works are being supervised by Horticulture Officer.  The Executive Engineer is the head of the Engineering Wing under control of Vice-Chairman.

This Wing attends to the work of financial matters, Budget of the Authority and preparation of the Accounts with Chartered Accountant on commercial lines which is to be audited by the Accountant General, AP Hyderabad, presently and the Accounts Officer is head of the Accounts Wing under control of Vice-Chairman.